Our new Daily Fantasy Sports solution has received a high score from the awards experts and has got a special prize.

In 2018, EvenBet Gaming was shortlisted in three categories for EGR B2B Awards. The winners were announced on 20th of June in London. Though we did not receive the main prize, our DFS platform launched in 2017 was really close to the win and was awarded as Highly Commended. 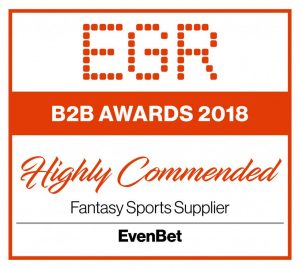 Congratulations to all DFS developers and the whole project team!

EvenBet Gaming CMO Ekaterina Giganova says: “We cannot underestimate the importance of the fact that our solution was Highly Commended in such a strong and high competition. Since the beginning of 2017, we have been working on, aiming to create an ultimate platform with modern design, all demanded features, many automation options for operators and great UX for players. Getting this special prize makes us believe we are coming close to what the market needs”.

In addition, EvenBet Poker platform was also competing for the award in Poker Platform and Poker Network nominations and was shortlisted for EGR North America awards 2018. EvenBet Is Exhibiting at ICE 2023